No Gluten, No Problem: Aurochs Brewing is Killing it

The four main ingredients in beer are water, hops, yeast, and barley. Quintessential, if you ask me. However, Aurochs Brewing is changing the game. How, you ask? By creating a gluten-free beer that is just good beer.

Founders Doug Foster and Ryan Bove wanted to create a better beer for those who have celiac’s disease or a gluten intolerance. As they both also have Celiac’s disease, they know firsthand the pain of having limited options when out at a bar or brewery. By substituting quinoa or buckwheat instead of the barley, the recipe was set for success.

And the beer is great and continues to wow me when I visit. Since switching to cans, Aurochs has started canning their flagship beers (Blonde, Amber, Session and Porter) and distributing it throughout the state. Blonde and Session IPA can be found all throughout PA. Personally, blonde is an all-time favorite for me when I’m looking for an easy, crushable beer to relax with.

The speciality series beers have developed a cult following as well. This past fall, the Pumpkin Beer sold out so quickly they needed to brew a second batch! This summer, it’s all about the Hazy IPA for Aurochs. With a dynamic tropical fruit flavor and aroma, this beer has a soft mouthfeel and goes down quickly. If you like new englands, you need to get this beer.

Lastly, Aurochs has a new release this week! The Strawberry Blonde is already a quick seller at the brewery. However, they’re amping up the strawberry this week by releasing a Strawberry Lemonade seltzer.

Currently, the taproom is not open yet because of its smaller size and limited capacity. However, they are open Thursdays, Fridays and Saturday for quick and easy pick up!

Listen to Auroch’s Brewing on Episode 43 of the Behind The Hops Podcast! 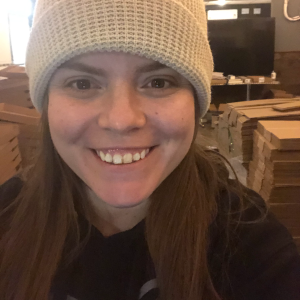 (She/Her) Educator by day, beer nerd by night. Blessed to be a member of the Pittsburgh beer community and celebrates all things craft beer! Favors stouts and the most quirky beers possible. If I can hike and go to a brewery, it’s a perfect day.
ALL POSTS BY THIS AUTHOR